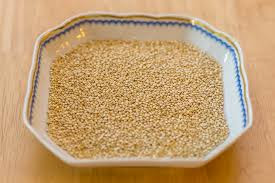 Is quinoa a nutritious food?

Yes. Quinoa is considered a healthy food because it is a good source of many nutrients, which when consumed with other foods can be an important part of a balanced diet. Quinoa is most known for its protein content. Compared to other plant foods, quinoa is generally higher in protein than most grains as shown in the table, while lower in protein than most legumes. Quinoa also has a favorable balance between its essential amino acid content compared to other plant foods. Finally, quinoa is a good source of energy and dietary fibre, and has significant amounts of minerals such as iron and zinc.
For More Quinoa Recipes